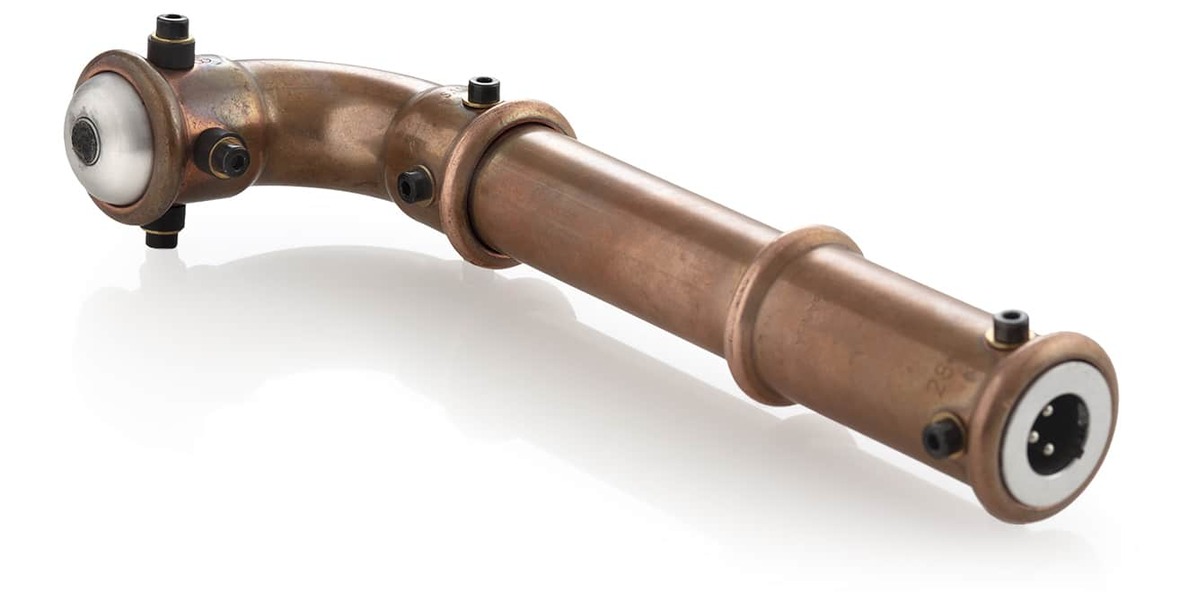 There have been quite a few ‘character’ microphones that provide a non-linear response, e.g. the Bastard BM88. It’s cheap fun for a bit of lo-fi telephoney character if you are going for a wax cylinder sort of sound. However, the Scopelabs Periscope is an altogether different concept.

The mic was three years in development. One of the designers is Matt Sartori whom I met many years ago when he was the tech at London’s Mayfair Studios. As well as being an expert outboard and console restorer and service engineer, he is also a gigging recording engineer. Sartori’s partner is Finnish sound engineer Paavo (AKA Dr.) Kurkela, who is also an inquisitive mechanical engineer. The mics are hand built in Finland, but have very quickly found favour around the world, with celebrated users including Butch Vig, The Chemical Brothers, Joe Barresi and Ricky Damian.

It arrives in a vintage looking stylised treasure-chest case. Nestling in the pink lining is the Periscope, fashioned mainly from untreated copper tubing – it looks stunning. Lifting it out of the box, it feels very sturdy and quite heavy. The three copper sections provide shielding and are held together with external protruding Allen bolts. The designers are clearly fans of steampunk, and Matt says they were inspired by the contemporary Sherlock Holmes TV series. He adds that the shape came from Paavo who was inspired while repairing the studio sink. However, Paavo disputes this, saying it came to Matt in a dream! The bottom section houses an XLR socket; clamped around the middle section is a plastic K&M clip which holds the mic securely and allows for rotation. The weight of the mic can cause droop but it is easy enough to tighten the bolt. The Periscope’s top section takes a 90 degree turn to the capsule, which is housed behind a bulbous aluminium dome with a black centre, looking very cyclops-like. It’s a bit unnerving, almost like having HAL 9000 staring at you. 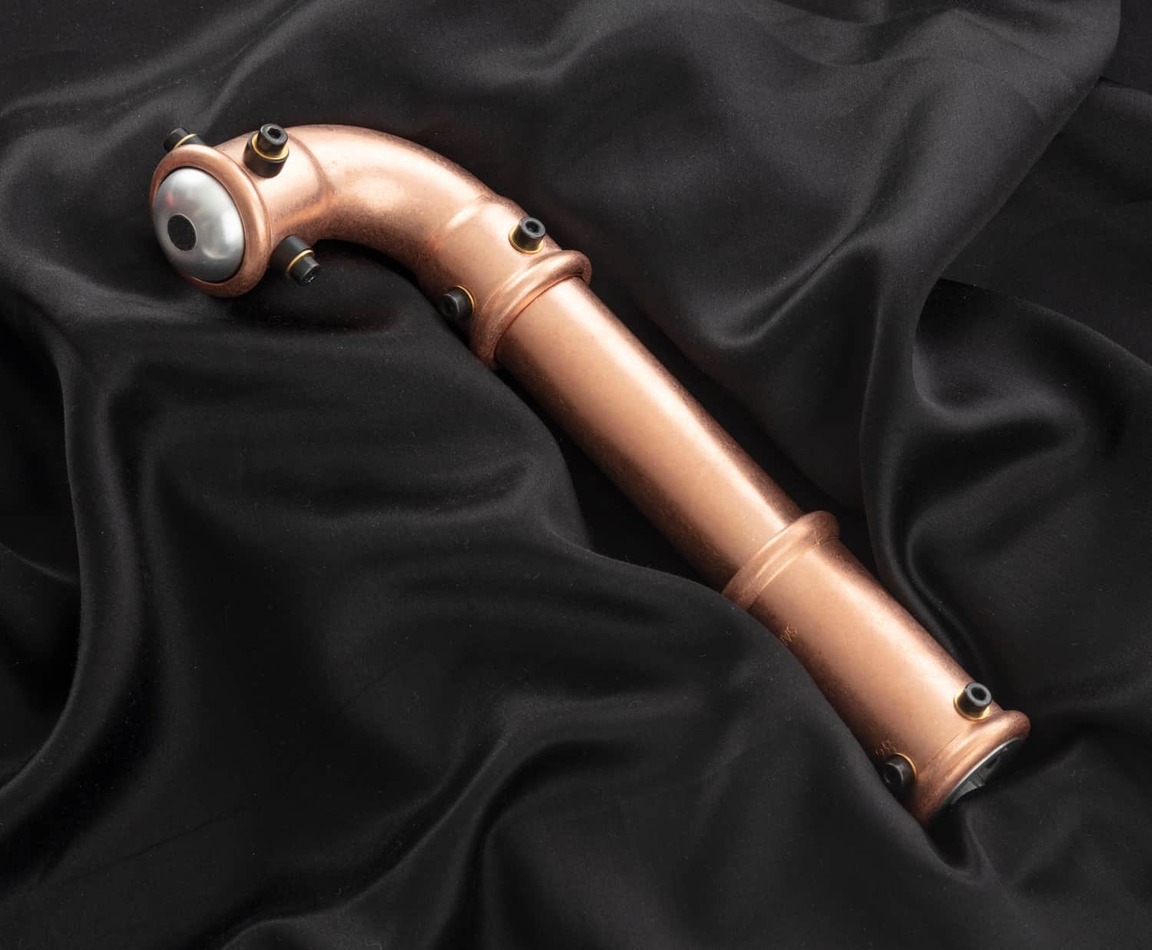 This thing needs 48v phantom power (10mA), as it is based around an electret capsule. However, also somehow hidden inside the tubing is a fixed-setting compressor circuit. You cannot change any settings, so this is entirely dependent on signal level and placement. Firing it up and just recording myself talking and singing into it, the results are instantly gratifying. The compression adds bit of squash to the sound, making my annoying voice somehow sound quite rich. The compressor seems to have medium attack that allows transients through, and a reasonably fast release – it doesn’t linger; you can hear it quickly opening up. You cannot really describe the Periscope as lo-fi; but then you also couldn’t describe it as hi-fi either! There doesn’t seem to be any great loss of upper or lower frequencies (as with the BM88); the omni capsule is not entirely un-coloured but generally covers the normal full range. However, the compressor squash is fairly strong, although not unpleasantly so! Even with my (admittedly bright and loud) Faith jumbo acoustic guitar, at about 45cm you could still hear the compression, even adding attack on single picked notes. It helped it really cut through the mix without sounding too chirpy. Some background hiss was evident when not playing – obviously the compression brings up the noise floor – but it’s nothing to worry about in most situations. Drum ambience is an obvious application for the Periscope, and here it doesn’t disappoint. Placed only about 4m away in a relatively dead space, the compression added great cohesive richness. It added some nice length to the ‘bosh’ of a low tuned 6.5” deep Black Beauty snare.

Although the condenser capsule is ostensibly omnidirectional, the high frequencies tail off considerably when off-axis. However, there is none of that claustrophobic clogged up proximity effect you get from cardioid mics; the omni character keeps this mic sounding friendly and open, even when considerable ‘squash’ is occurring.

It’s the kind of mic to leave plumbed in at all times. Whatever you are recording, it might be worth a listen to what it is doing and moving it around a bit for some options later. In combination with more sonically pure mics it lends a touch of character and warmth – instant parallel compression!

The more you use the Periscope, the more you admire the development that must have gone into it. Somehow, the compressor almost always sounds fabulous. I mean, who doesn’t love a bit of compression? But these ratio, attack and release settings tend to work in most situations, even if they are not what you might have chosen. The Periscope is a very clever idea. Yes, you can probably achieve something similar with plug-ins, but there is something groovy about the plug-and-play aspect of this. You won’t waste time fiddling with compressor settings; it either works or not. And usually it does, bringing smiles all round.

Pros: Character microphone with cleverly tweaked (fixed) onboard compression that almost always sounds wonderful alone or in combination with other mics, great looks will impress and intrigue clients

Cons: You will probably want two of them, K&M clip a bit plasticky, I wish it would stop staring at me!