Laurie has been producing records since the mid 70's but he looks and acts much younger than he must be. Some of Laurie's work is iconic, for example Ian Dury's 'Sex and drugs and rock and roll' is a classic. Laurie worked on the classic Paul Young album 'No Parlez', he has worked with Squeeze, The Police, The Stranglers, Cher, Sinead O'Connor, Paul McCartney, Robie Williams, Jamiraquai, Feeder, Dionne Warwick, Beverly Knight, Bono etc etc.

In late June 2008 we met up with Laurie Latham at the fabulous Helicon Mountain Studios in London. The studio owned by legendary musician Joolz Holland is gorgeous, it's superbly equipped with an SSL G Series console, loads of great outboard, mics and has a fantastic live room. We tried during the photo shoot to capture some of its charm.

We have listed off a good selection of his landmark productions below but in a nut shell, Laurie is a super talented producer who can really bring things to the party and help you make a fantastic record! 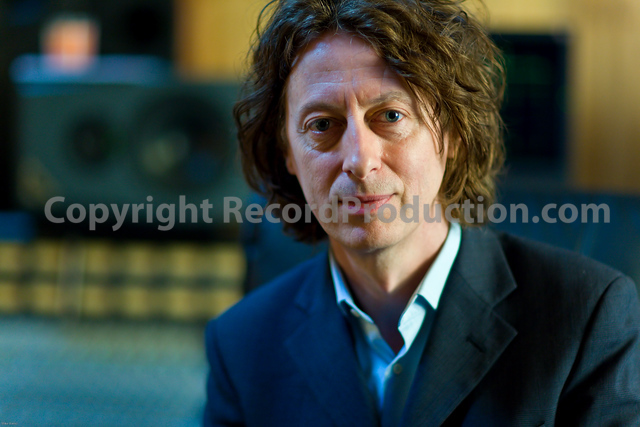 We have edited the video feature in to two parts, a further video will be available sometime in the future, in the meantime check out some of the pictures that we took in our gallery.

The early seventies saw Laurie begin to engineer late night reggae sessions including tracks for Jamaican star ALTON ELLIS and soon graduated to position of Chief Engineer working with many different artists as diverse as VIVIEN STANSHALL to JIMMY WEBB. Unique and memorable sessions for Laurie during this period were recording the music for the film ‘MONTY PYTHON & THE HOLY GRAIL’ and also again with the Python team recording ‘The Lumber Jack Song’ with George Harrison producing.

By the mid seventies Laurie have developed a long working relationship with MANFRED MANN who helped him immensely with song structures and composition culminating in a successful period of work including the hit single ‘Blinded By The Light’ which reached number 1 in the USA.

After a brief spell working in the USA Laurie returned to the UK and with the legendary Blackhill Enterprises now as his management began work with IAN DURY recording the new national anthem ‘Sex And Drugs And Rock’n’Roll’ and then the production of the classic album ‘New Boots and Panties’ which remained in the chart for over two years.

Other productions included the singles ‘What A Waste’, and ‘Hit Me With Your Rhythm Stick’ which went to number 1 in the UK in 1979.

In 1983 Laurie produced for PAUL YOUNG the multi million selling album ‘No Parlez’ reaching number 1 in the UK and many other territories. The record featured hit singles ‘Love of the Common People’ and ‘Wherever I Lay My Hat’ which also reached number 1 in the UK. This was followed by the equally successful ‘Secret of Association’ album which included the number 1 USA single ‘Every Time You Go Away’. The year ended as runner up to Quincy Jones (‘Thriller’) in the Music Week Awards for best producer and was also a nominee in the first ever televised BRIT Awards Ceremony.

The 80’s continued producing hit records for ECHO AND THE BUNNYMEN ‘Bring on the Dancing Horses’ and ‘The Grey Album’; SQUEEZE’s ‘Cosi Fan Tutti Frutti’; THE STRANGLERS ‘Aural Sculpture’ with the hit single ‘Skin Deep’. THE POLICE who had reunited to make a sequel version of ‘Don’t Stand So Close to Me’. THE CHRISTIANS first album which topped the charts and became the biggest selling album by a debut artist for Island Records. The 90’s started with Laurie producing THE CHRISTIANS follow up album ‘Color’ recorded in the Channel Islands with STEVE FERRONE and MANU KATCHE sharing drum and percussion duties. This album went straight in the charts at number 1. Production work for EMI followed with the guitar band DIESEL PARK WEST; their LP ‘Decency’ was recorded in Brussels on a vintage Neve console and entered the UK charts on its release.

The mid nineties saw Laurie setting up base at Helicon Mountain Studios where he collaborated with JOOLS HOLLAND in the launching of the independent record label ‘Beautiful Records’. Also at this time Laurie assisted CHER with her writing and produced three tracks. In 1995 Laurie was hired to re-master the entire back catalogue of Tamla Motown Hits. Production work on RIK WRIGHT’s (Pink Floyd) solo album ‘Broken China’ featuring SINEAD O'CONNOR and DAVID GILMOUR. Co-wrote and produced the theme tune for the TV film ‘Starburst’ with MARTIN CLUNES, NEIL MORRISEY and JOOLS HOLLAND.

At London’s AIR studios Laurie was re-united with IAN DURY to finish and mix highly acclaimed album ‘Mr. Love Pants.’ Further work continued with Ian producing tracks at Rak Studios London for his new album ‘Ten More Turnips From The Tip’. Sadly Ian passed away before the record’s completion. However Laurie finished production of the record with ROBBIE WILLIAMS contributing vocals to the final song Ian had written.

In 2001 Laurie produced the STEREOPHONICS hit single ‘Handbags and Gladrags’ which reached number 4 in the UK single charts and it was then included on the re-released version of their album ’Just Enough Education to Perform’ helping it achieve the number 1 position.

Laurie also produced an album ‘TOM JONES & JOOLS HOLLAND' for Warner Brothers, further production work included the single ‘Cry’ for the artist KEALER which received positive reviews and much radio airplay also an album and the single ‘How Ever Did It Come To This ‘ by the band EASYWORLD.

In recent times, Laurie produced ten tracks for the first solo album by RAY DAVIES (of the KINKS), he has also produced Jools Holland's guest albums 'Moving Out To The Country', 'Best Of Friends' and 'The Informer'. These albums have featured collaborations with KT TUNSTALL, DR. JOHN, BOB GELDOF, LULU, INDIA ARIE, SOLOMAN BURKE, MARK ALMOND, to name but a few.

Special Thanks to SPJ for the biography and to George Shilling for asking the questions on camera!

Wez Clarke - Interview at his studio